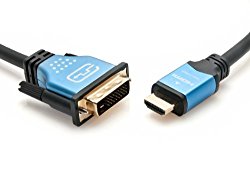 The BlueRigger HDMI to DVI Adapter Cable will connect any DVI-equipped monitor or TV set to any HDMI-equipped device such as Blu-Ray, PlayStation 3 or Xbox 360. These cables help you extract maximum performance from your gaming or home theater set up.Use with Blu-Ray Players, Gaming ConsolesThis BlueRigger HDMI to DVI Adapter Cable connects computers & other source devices with HDMI outputs such as Blu-Ray players, Xbox 360 to DVI-equipped televisions or monitors. It provides maximum support for resolutions up to 1920 x 1200. This cable supports high-bandwidth, uncompressed video & provides your system with high-definition video quality.Convert your Computer into a Home Entertainment CenterWith this cable you can watch computer based media on your TV or a projector. It connects computers with DVI connections such as home-theater PCs, Mac minis, & some laptops-to a HDMI-equipped HDTV or other display device with HDMI connection. Compatibility- Connect your DVI-equipped device to an HDMI-equipped HDTV or other digital display - Connect your HDMI-enabled devices such as computer, Blu-Ray, PlayStation 3, Xbox 360 to a DVI-equipped monitor or TVNote: HDMI to DVI does not pass audio.A separate audio cable must be used for audio.Gold-Plated Connectors for Optimal ClarityThe cable has a robust PVC outer layer, gold-plated HDMI A Male to DVI Male connector that offer protection from RF & EM interference. These connectors also resist corrosion while providing optimal signal transfers. WarrantyAll BlueRigger cables & adapters are backed by a Limited Lifetime warranty. Please contact us via email if you have any questions.