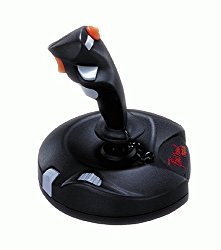 The digital version of Gravis's popular Blackhawk joystick is an excellent all-around peripheral at a decent price. With a variety of preprogrammed key sets as well as the easy-to-use Gravis Xperience software for personalizing the stick with your favorite games, it's a solid combat and racing joystick. The Blackhawk Digital contains five action buttons as well as an eight-way POV hat switch for superb twitch control and a rotary throttle controlled by your left hand. It also features a pass-through game port, allowing you to connect more than one device for head-to-head gaming. The digital technology allows for greater accuracy and easier calibration during setup. The heavy, round base provides adequate support, and the molded plastic handgrip is comfortable. Even with a thick base, the entire unit is rather compact and won't take up much desk space. We especially liked the feel during flight sims, where we could almost fly one-handed, with the solid base and the nice stick spring-back adding support.To install the Blackhawk digital joystick, you need to shut down your machine and attach the Blackhawk to your sound card's game port. From here, the Gravis Cyber Chic (a purple-maned digital babe) walks you through the steps for installation. (Gravis knows their audience!) In addition to containing the drivers for the Blackhawk, the enclosed CD-ROM includes Gravis Xperience software, which lets users create their own personalized key sets for games. Gravis provides a couple dozen preprogrammed key sets for games such as Sega Rally, Microsoft Flight Simulator 2000, and Air Warrior II, and it's simple to import these as well as create new ones. You can spend a lot more for a joystick if you're looking for extras like force feedback and more buttons. But for the price, you could do worse in a dogfight than the Blackhawk digital. --J. Curtis Pros: Xperience software lets you program key sets Nicely priced Cons: Setup takes some time Basic controls

Do you want ot get the Gravis G10171B Blackhawk Digital Joystick for Windows?