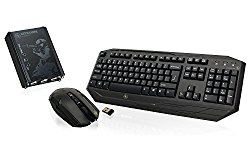 Keyboard, Mouse and Emulator for Game Consoles PC gamers have long known that when it comes to gaming, especially with First Person Shooter (FPS) games, nothing beats the speed and precision of using a mouse and keyboard. For this reason, IOGEAR created the KeyMander to bring the advantages of using a keyboard and mouse into the world of console gaming. Getting started gaming with the Keymander is easy, but it normally requires you to add your own keyboard and mouse- until now. The new KeyMander Wireless Keyboard & Mouse Bundle is ready-to-use, with everything needed to help you get started gaming with a keyboard and mouse on your PS4, Xbox One, PS3 or Xbox 360 game console*. The bundle includes the KeyMander - Controller Emulator and Kaliber Gaming™ Wireless Gaming Keyboard and Mouse Combo so it's now easier than ever to start racking up the wins during online game play. The GKM602R keyboard and mouse set are completely wireless suing RF technology, so you can enjoy the freedom to game while sitting at your desk, on the sofa, or anywhere up to 33' away from the Keymander. Console Gamers & PC Gamers Unite The IOGEAR KeyMander Controller Emulator turbocharges your console gaming experience! If you've ever played the PC version and console version of the same game, you have undoubtedly noticed how much faster the game play is on the PC using a keyboard and mouse. Let's face it, joystick controllers are slower to aim and they make moving while attacking multiple targets much harder than it needs to be. By connecting your keyboard and mouse to the KeyMander, all controller commands can be more rapidly and accurately accessed, providing a definite advantage for first person shooters, role playing games, etc. If you are a console gamer that has never used a keyboard and mouse with your favorite games, you owe it to yourself to experience the ultimate in speed and control. Likewise, if you are a PC gamer that has avoided console gaming due to the poor control scheme of the joystick, now is your chance to game the way you want and still enjoy the benefits of not having to update your PC hardware every time a new game title is released.PSN and Xbox Live gamers will really appreciate the way KeyMander takes advantage of your keyboard and mouse skills to help you pwn your online competition. Accuracy, Control and Customization The KeyMander's PC software enables macro programming, speed adjustment, key mapping and a number of other advantages to help you gain the upper hand in your online multiplayer battles. Move your controller functions to wherever feels the most natural- on the keyboard or the mouse. Got multiple gamers under one roof? Each person can have their own KeyMander control profile. You can load different keyboard layout profiles for different games, or even use multiple profiles in the same game so when you are doing something different, like driving a tank, you can use a more optimized layout. Create Custom Profiles The Keymander gives you near limitless customization options. Give yourself the advantage you've been looking for with all your favorite FPS (First Person Shooter), RPG (Role Playing Games) and RTS (Real Time Strategy) games. Build your custom profiles for specific games and scenarios. In addition, you can group these profiles per game or create profiles for different gamer's. Macro programming, deadzone adjustments, mouse sensitivity adjustments and ballistics editor, custom key mapping. Create groups for different games or users; have up to 8 profiles to a group. Quick hotkey profile switching during live gaming! Wireless Gaming Keyboard & Mouse The bundle includes the Kaliber Gaming GKM602R Wireless Gaming Keyboard and Mouse Combo, with gaming-specific features plus a 2.4GHz wireless connection, so you can get your game on from a distance of up to 33'. The Wireless Gaming Keyboard incorporates proprietary Diamond Ring Keycap structures for a solid stroke, free of the lateral play or "slop" common to other keyboards. Eight anti-ghosting keys ensure important keystrokes are always accurately read, even when you're mashing multiple keys. It also has a water-resistant design, so spilling your drink in the midst of a gaming frenzy won't cost you a new keyboard. Also included is the GKM602R's precision gaming mouse which features 7 buttons, including two adjust on-the-fly DPI buttons for perfect shifting between speedy movement and controlled aiming. To stand up to the rigors of online gaming, the GKM602R mouse features Omron 10-million cycle switches and uses an LED optical sensor for reliable performance. System Requirements PS4 requires a Sony Playstation brand wireless controller connected via a micro USB cable PS3 requires a Sony Playstation brand wireless controller connected via a mini USB cable (Sony DualShock 3 SIXAXIS controller is recommended) Xbox One requires a Microsoft brand Xbox One wireless controller connected via a micro USB cable Xbox 360 requires a Microsoft brand Xbox 360 wired controller