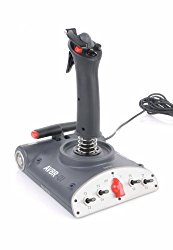 Saitek launches the Aviator – the first dual throttle joystick for modern flight simulation games. The Aviator is designed with everything you’d expect from a high performancejoystick, including a rugged, military-style design, rapid response trigger, 8-way hat switch, plus illuminated rocket or missile fire button with safety cover. And a first in joystick design, the Saitek Aviator features dual throttle levers. These enable independent control of multiple engines when flying a large bomber or modern passenger jet, or an engine/flaps combination for better control during take-off and landing. The dual throttles can also be locked together for simplicity when flying single-engined aircraft. Additional controls include 3D twist for precise rudder control whether taxiing or in the air,front-mounted instrument panel which includes base-mounted toggle buttons with up and down switching functions, and mode selector to instantly change the Aviator’s controlsto suit flying scenario. Saitek’s programming software means the Aviator offers up to 8 separate commands which can each be programmed separately. The Saitek Aviator represents a new direction in joystick design. The groundbreaking dual throttles and a wealth of programmable switches and controls make the Aviator the perfect joystick for the latest flight games, designed to offer gamers both the maximum flight sim authenticity and control. No other stick is as well suited to the planes being flown on today’s PC Flight sims.