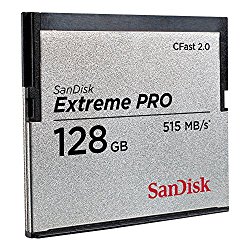 Designed in parallel with leading-edge camera manufacturers, the SanDisk 128GB Extreme PRO CFast 2.0 Memory Card offers more than twice the shot speed of today's fastest memory cards. As the next generation CFast 2.0 memory card, it delivers the speed and capacity professionals need for Full HD recording specifications, including high-definition 4K video recording. Next level write speeds help you keep up with the new generation of professional cameras and camcorders, while data transfer speeds of up to 515MB/s make your post-production workflow more efficient. And capacities of 128GB give you plenty of room for large RAW image files and the high-quality video that broadcast and cinema demands.Designed in collaboration with leading-edge manufacturers, this CFast 2.0 memory card delivers the high performance of the broadcast, cinema and photography industries demand today. The SanDisk Extreme PRO CFast 2.0 memory card is more than twice as fast as today's fastest cards. With write speeds of up to 440MB/s, (2933X) and data-transfer speeds of up to 515MB/s (3433X), the 128GB memory card can keep up with the burst-mode shooting of professional-grade cameras and camcorders. It also saves you time when moving large image or video files from your camera to your computer.Resource-intensive Full HD and cinema-quality 4K video recording require high write speeds. The SanDisk Extreme PRO CFast 2.0 offers the speed required for flawless high-resolution video. This camera card is compatible with the new generation of high-performance cameras and camcorders based on CFast 2.0 technology. This memory card can operate in temperatures ranging from 23 to 158 degrees Fahrenheit.Features: For new-generation, high performance cameras and camcorders based on CFast 2.0 technologyExtreme recording and shot speed up to 440MB/sReady to shoot cinema-quality 4K video (4096x2160p)Built for broadcast, cinema, and photography professionalsUnprecedented transfer speeds of up to