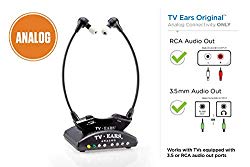 The TV Ears original is our most affordable voice clarifying headset system. This TV listening system actively clarifies and amplifies speech and dialog while lowering background noise so you can actually hear what's going on. No more rewinding parts of the movie or asking the person next to you what was just said. You'll hear every word. The TV Ears original also allows you to listen to your television without turning up the volume on the TV. This gives other people in the room The ability to watch TV with you while you listen at your own volume. Simply connect the transmitter to your TV, cable box, or satellite box equipped with analog audio out ports and you're ready to go. For Our most basic wireless TV listening device, The TV Ears original makes TV listening enjoyable again. What makes TV Ears products stand out above all other TV listening systems is a proprietary technology called voice clarifying circuitry. An advanced microchip in the transmitter captures the audio signal and amplifies the human speech frequencies above the background noise so that spoken words are clearly audible. This basically boosts the sound of the dialog. Unlike lesser analog models that merely make all sounds louder, TV Ears' Products amplify voice pitch frequencies above other sounds, so words are easier to discern. The words seem to jump out of the track, making even whispers and accents understandable.